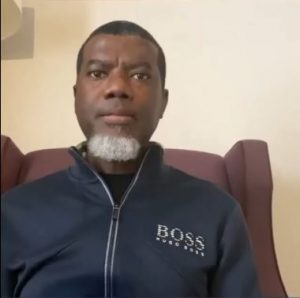 Reno Omokri Berates Men Who Weep After Women Leave Them

A Twitter user who didn’t agree with Reno’s post replied saying; ”Until a good woman leaves you…men are human too”

Former presidential aide, Reno Omokri has berated men who weep when their women leave them.

According to him, it is a sign of weakness.

In a tweet shared on his handle, Reno wrote; ”When a man cries over the death of loved ones, he gains respect. But if he cries because a woman left him, or rejected his proposal, he projects weakness.

“How can you cry because of a girl? Yes, Christ wept. But where was He was when He wept? At Lazarus’s funeral!

A Twitter user who didn’t agree with Reno’s post replied saying; ”Until a good woman leaves you…men are human too”

Responding, Reno averred that if a good woman walks out on a man, he should go and look for a better one. According to him, there are many other women outside. He opined that if a man has made money and has self-control, no good woman would leave him. He averred that women leave men who are “clingy and needy, always professing love and writing poems to them and always following them like a puppet.”

Develop yourself to the extent that it is women that should cry at the thought of losing you. Stop chasing them. Go and chase success. By the time you have a good command of business, coupled with self control, and have made money your servant instead of your master, no good woman will leave you!

But when you are so clingy and needy, and always kowtowing to her, and professing love, and writing poems, and following her around like a puppy, you will make it impossible for her to respect you, and she will pack her kaya and look for a real man who knows that he is the head in the relationship.” he wrote

Previous post Lewandowski To Be Named “Best Player In The World”