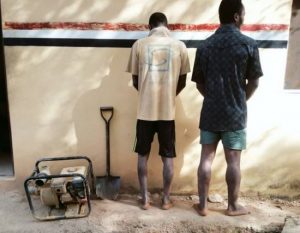 The arrests, according to Daniel Adigun, the Public Relations Officer of the State command, was in line with the mandate of the corps, which is to track down all illegal mining operations in the country.

The duo, 24 and 26 years of age, respectively, who were tracked on Sunday, December 22, 2021 to Iperindo, Atakunmosa East Local Government Area of the State by personnel of the corps, were arrested in the act of carrying out illegal mining activities.

Meanwhile, the Osun NSCDC Command has revealed that the suspects would be charged to court after investigations have been concluded.

The Commandant, Emmanuel Ocheja also warned all criminal minded persons in the State to relocate from Osun or be prepared to face the consequences of their despicable acts.

He added that such acts were culpable of denying the Federal Government of revenue earnings which are meant for the common good of the people and which could be used for the socio-economic development of the State.