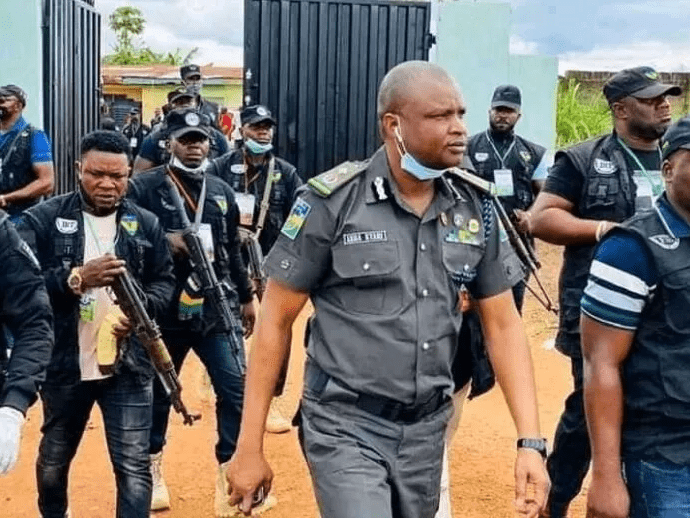 How Will 109 Inmates Attack Abba Kyari And No One Touched Him? He be ghost?

murder in prison,
Prison officers are thinking of moving suspended police officer Abba Kyari to the hands of the State Security Service (SSS) from the Kuje prison after he almost got killed by aggrieved inmates, who accused him of insincerity in bribe-for-release agreements when he was in operational service., he was reported to be attacked by 190 inmate in the prison.

Meanwhile, Nigerians don’t believe the story, many have their own views about the report so they voiced out their mind with they social media pages.

How will 109 inmates attack Abba Kyari and no one touched him? He be ghost? Abeg if una wan remove him from prison to private apartment please do it secretly, as usual, and stop insulting our sensibilities. Normally, only one angered inmate fit faint Abba Kyari na.

@BillionZTHEgOD
I actually don’t believe Abba Kyari is in Prison, it’s just regular media upkeep stunt, he’s probably chilling in his Mansion right now, reading all of your tweets with a bottle of champagne and gold-brown fried dodo and Snail-Gizzard combo.
DR.PENKING™
@drpenking
Abba Kyari was recently attacked by over 190 inmates at Kuje Prison who accused him of prosecuting them even after collecting bribe from them. This man might probably pass as the most corrupt police officer to ever walk the earth,
Lawrence the Great
@Lawrinzo30
Super cop Jack Bauer Abba Kyari, the 109 inmates that he unjustifiably jailed attempted to kill him in prison but he gallantly escaped. Jack Bauer! Hot dodo. Transfer him to Aso Rock where he will be safe.
Impressed LOCALMAN
@OyemomiDamilare
In a sane country all cases done by Abba kyari will be reviewed and alot of people will leave prison with compensation. But Nigeria is a zoo, no body cares. This is how his case will drag till we forget him. NAIJA which way na.
UGWUCHINYERE
@MCDOFF
Abba kyari acted as a consigliere to the Fula oligarch which was why their plans became obvious after his demise.MNK knew this & revealed it,Hate him as much as you like,he was our intellectual reconnaissance.He forewarned about the plans of the Fulanis.For this I owe him respect.
Africa Info 247
@SmartAtuadi
Nigeria should make life easier for Abba Kyari and bundle him to United States of America to answer the cases hanging on his neck. Unless they are planning to unleash him in 2023, for elections rigging and all.
@Official_M_Agbo
Another Wahala For Dead Body,As Over 100 Inmates Attack Disgraced So Called Supercop”Abba Kyari” In Prison For Prosecuting Them After Collecting Bribes. He May Be Moved To Another Facility.
@UtcheyChukwuNna
Plz, does anyone have update on Abba Kyari’s case? Has anyone heard anything abt the victims of the Abuja/Kaduna bombed train still in captivity? It is already months now. Deborah’s killers are still at large, no justice for the family yet? Nigerians, we forget things very fast.
Olaudah Equiano®
@RealOlaudah
Abba Kyari is a drama Queen. He understands Nigeria’s idio so much and uses it to his advantage everytime. Don’t mind him o, nobody wants to kill him anything!
MUSA MADAKI
@PillzMadaki
So you guys mean to say that 109 kuje prison inmates attacked fraudulent DCP Abba kyari and he survived it. That’s a stupid lie because that’s the same number of senators milking Nigeria that’s why we are where we were.
ALADE, Abiodun T
@Biodunpen
Abba Kyari is sponsoring media campaign to leave Kuje prison. His life is not in danger. Oga, stay there and answer for your crime. The Controller General of the Nigeria Correctional Service (NCoS) must debunk Kyari’s lie which has put the service in bad light.
@SLukako
The Kuje attackers claimed Mr Kyari prosecuted them despite taking bribes from them. By Premium Times. Prison officials are considering moving suspended police officer Abba Kyari to the custody of the State Security Service (SSS) from the Kuje prison after he nearly got

Previous post Those Unknown Gunmen Are Not From Anambra, Said Governor Chukwuma Soludo