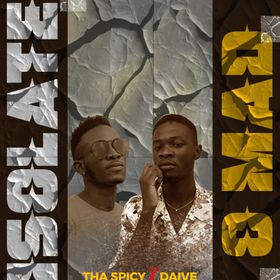 Spicy Awayo has been one artiste who’s zeal and determination for the art has been nothing short of visibility in the not so spacious vicinity in which he has managed to let himself noticed. This time, here is a project type release that has a new singer on it  by the name of Daive. To be frank, I do not really know what the idea behind this project is. It is a two track E.p from what I can understand or just two tracks planned for a single release, one would start to wonder why there wasn’t instead, two releases to give room for conceptual consistency.

Digging in, you can already get the vibe and probably also, the idea revealing the fact that these two are showing that they can actually dish out those fine-tuned type, A-Class Nigerian club bangers and ultimately compete in the highly unfriendly Nigerian music market place. A combination of carefully written rap laced on a mid-range tempo, and a vocalist who is obviously trying his best not to show flaws but, no one is above that, especially on this level. The track one titled “Isolate” cannot pass easily as the type that might gain quick acceptance into the overly competitive market space in Nigerian music, but the efforts put in on the track can be felt by merely listening. I almost didn’t have a single problem with the track even with the fact that I barely noticed any distinction that should stand an upcoming commercial project out but, I really do not get the gig behind the vocalist’s pronunciation of “Isolate”. I do not know if that was intentional or just one of those new school things, nevertheless, new innovations in music need to be extra creative if you’re not a Burna Boy, a Wizkid or even a Techno. As for the rap verse, I must say, a track like this has not a single burdened expectation for expert lyricism and depth, although we are expecting a very catchy flow and a sing along type rap. Spicy’s verse wasn’t all that but for a commercial song and the type of rap one would expect to fix into this, I think the dude got some musical ideas., so it is almost impossible to write that off and the flow was above ok.

The second song titled Mad is obviously not as musical as the first track but we can already see that it is the planned club banger. A little bit noisy and does well  to almost sway off opinions initiated by the first track and eventually gives a different idea of both artistes. The mystery of the double release still doesn’t solve itself with this track. The tracks obviously does not compliment each other hence with my good sense of judgement I would want to conclude that this isn’t really a planned project, it would be safe to say they two different tracks of different types of inspiration which had to be released at the same time, for some reasons best known to both artistes. So am I impressed with this song? I really do not know about that., but is it a bad song, Hell No, the Djs would prefer this track to the first one obviously, But I am going to be doing my ratings judging this as a body of work.

There are no production credits both on the tracks and on the artworks so I do not know how the songs came about, production wise, but whoever made the beats understands the growing space in the Nigerian music industry. These are the types of beat worthy of display and circulation currently so we are not holding anything against these instrumentals aside the prototype nature they carry, which of course doesn’t write them off. Give what is to Ceaser to Ceaser right?

The vocals are great and the clarity is not on a 100 percent but it can also get a pass.

Scroll down to see what our ratings machine has to say about the project.

Previous post Exposed! Why Dj Cuppy Is So Obsessed With Zlatan