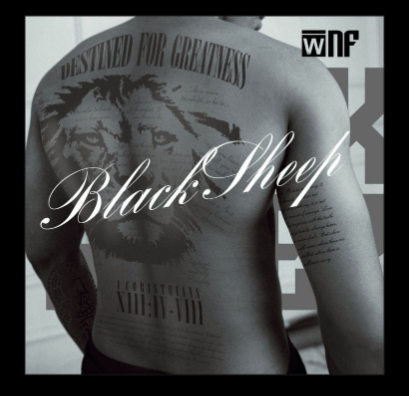 For those of you who do not know who WNF is, he is an upcoming rapper who intertwines a little bit of RnB to infuse melody in his tracks. It is probably a fusion of his own ideology, maybe that is something we will get to find out later. He is currently based in PortHarcourt, Nigeria, and already has a couple of features to his name. WNF is one with a distinct personality and has a vaguely different view spewing from being open-minded but not too far off the popular cosmopolitan belief system and as he ventures deep into music, he has shown that he can be prone to infusing his beliefs into his music and we hope he understands that a merryjerimandarism of such can go a long way to influencing the outcome of his career. But before I digress, I want to focus on “Black Sheep”. I will dive right in to review this new work which he recently put out called “Black Sheep”. I know, the name already says a lot and you are probably thinking or assuming the worse, or simply put; you are about to witness a lot of blasphemy.

Black Sheep according to WNF is his second official single, the official first single being “Genius” which he released in March. Black Sheep is obviously one of those tracks you set aside as an artiste to clarify where you stand in the community, and to WNF’s version, there is no irony whatsoever, it was just straight to the point. Let’s break down a few important components.

The Production – The Beat

There is no gainsaying to say that there is an obvious concept to the way the beat was arranged and made. Someone somewhere definitely had an idea of what they were gunning for. The sequencing is precise, and the bounce is great but what was missing? Clarity! Was it planned? Well as soon as the production team gives an interview, I guess we might never know. The crips delight and feel that comes with a mastered 808 hip-hop loops is not on a hundred even though it was infused, a little scattered blasts (are you a sound engineer?) here are there and I am almost dissatisfied. The beat still gets a pass mark from us but the hip-hop community is constantly raising the bar when it comes to the finished product of a beat. I guess the composition is no longer enough.

The vocals should have done a good job complementing the little flaws emancipating from the production of the beat but unfortunately in music production, there is what we call “polishing the turd”. In a simpler term, this explains trying to better an already ruined process or product expecting a great output. In music production, it is not at all advisable and it almost never works. The final mastered work is good but not great even though they tried to polish the turd.

For a song like this which we have categorized as a controversial one, we will look at the lyrics from a critical standard rap point of view and also consider the depth in relation to the topic of choice by the artiste. As a rapper or a rapping artiste, the velocity of your lyrics depends on your area of specialization or what you have decided to base your songs on. WNF has not really taken a dark turn just because we said this track was controversial and so we are not expecting him to be extra deep, doing things like lyrical picture paintings and using parables and metaphorical punchlines to send his messages home. Yet, judging by the route he chose to take, WNF should not drop a “whack” verse. Average maybe, but not whack.

If a rapper presents to me a song titled “Black Sheep”, I definitely would anticipate some intricate bars, lines about family feuds, parables, and telltales about life’s principles outwardly justifying the decisions leading to his transformation and so on. The lyrics were surprisingly mild but thankfully it got what I call “side attractions”. Lyrics that are almost too explicit to be said on a track especially around a demographic pretending to have inherited a consumer base of morally inclined individuals. A place such as Nigeria. For example, curse words are not really appreciated on a track and you might miss out on your chance to feature in the mainstream media.
So what has WNF done here? Well, he was careful enough from my observation, telling his story in very simplified lyricism and almost swayed the listeners with his desperation for greatness and wishes to use the known channels to attain riches and fame, the illuminatti and the rest, also displayed in the lyrics. Well, I guess that really explains why he is the Black Sheep.

So Where is This Song Really Lacking?

First, for the environment, there is not an example of someone who does this type of song and immediately garners massive Nigerian listeners and followers, they have to be really inside the system. Hopefully, our artiste got a plan to infiltrate the system without playing by the rules in the Nigerian music industry regarding content, relatability, and language. I think we know what WNF is aiming at here and it is simply cute but one of the sacrifices an artist such as WNF is to bend a little to satisfy the audience in his immediate demographic.
Check out our rating for this song below

Next post The Evolution of Battle Rap in Nigeria (Part 1)