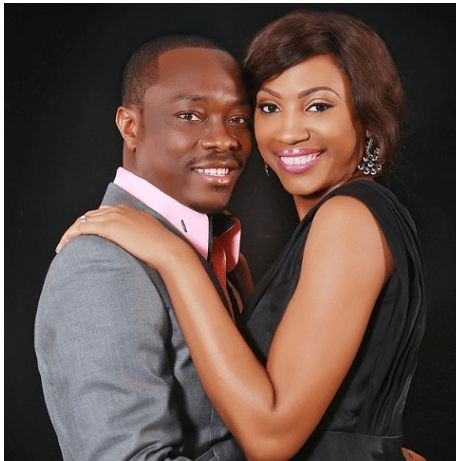 Julius Agwu: Let His Side Chics Also Take Care Of Him, The Comedian Wife

It has been alleged that Ibiere Maclayton, the wife of famous Nigerian comedian Julius Agwu has moved on with another man despite the state of her sickly hubby.

Hence Julius Aguw’s wife, Ibere, had also called on side chicS to take consideration of him since they still enjoyed the comedian’s funds when he stood financially positive.

According to a relative basis, the wife also said, those side chics too should take care of him, after all, we spend his money and enjoy ourselves together but now that he is broke, they all ran, for now, we believe that the comedian’s wife has moved on with another man.

“She carried him for some time though there were cracks in the marriage. Perhaps she got exhausted of the present condition—cash flow wasn’t as when the comedian was stupendously wealthy and fit. She must have been exhausted from the problem and left Agwu who isn’t as fit as earlier,” initiates near to the couple disclosed Kemi Ashefon.

material gworl.
@witcheress_
Lmao at the men calling Julius Agwu’s wife. “Fairweather wife”. It’s too funny that they expect women to stay by them through thick or thin after they’ve spent a lifetime being useless community penises. I’m happy for her that she chose herself. You people can cry all you want.
Susuisababe
@caronisuzy
How many men will take care of their cheating wife when she is sick, but some dumb men on this Julius agwu trend expect his wife to take care of him after cheating, the double standard is disgusting.
Evang BMC (Ada Buhari 1 of )
@nwa042legit
When u treat ur wife badly, she will be patient with you waiting for the repayment day. Julius Agwu never saw this coming. Husband treat ur wife with respect, u can fuck anything u see but don’t disrespect ur woman. Every dog dey eat shit but na who carry am for mouth we know.

The Good Wife
@GoodieWifey
Nigerian men have been chanting “till death do you part” on top of Julius Agwu’s matter but for some reason, they aren’t willing to accept that Will Smith might actually take those vows very seriously with his WIFE!!!
Ikemba Zaza
@mazi_ikemba
Julius Agwu in summary; 1. He got sick like 15yrs ago, his wife nursed him to health. 2. Baba got well, & moved in with a side chic flexing life. 3. His wife vex, & moved on with another man too 4. Baba fell sick again, they’re calling the wife to come & take care of him again
Dr. Curiousmind, (MD)
@MandyamekC
This Julius Agwu’s story is like d ones we see in those good old Igbo movies. Hw we Nigerians r quick to tell women how much they should take in a marriage inorder to qualify as a good wife baffles me. We keep redefining dishonesty everyday to suit a man’s lack of discipline.
KingCreator  Kingsley Ekanem
@Kingcreatorr
Truth is a man can actually love nd cherish his wife without cheating on her Who made the law that cheating is compulsory for every married man Cheating as a married man is a NO for me and that’s my choice when I’m married And as for Julius Agwu I pray he recovers soon
Akwaugo 1 of Lagos
@DeevaOfficial
Imagine thinking that I nursed my husband back to health and the minute he got better, he begins to have extramarital affairs. Lol. He will certainly be alone this time. Goodluck to him. All of you should leave Julius Agwu’s wife alone.
GenZ Designer
@PrincessUkoko
Men are crying over Julius Agwu’s wife, like it’s not the same gender that abandon their wives after child birth because “her body changed”. You can’t deal with a woman’s post partum body, but you expect women to tolerate bed ridden cheats.
Design Baddie

@Egovin__nwa
That julius agwu’s gist reminded me of a woman that used her husband’s phone to invite the side chics to the house when he had stroke. She turned them to his nannies for a week. They were changing diapers and cleaning poo
Health is more important than wealth. Julius Agwu fell sick at the peak of his career, he has been sick for over 15 years now. He has lost his wife, even side chics. He might not even know what he has or does not have now. I wish him the best. I pray he recovers.