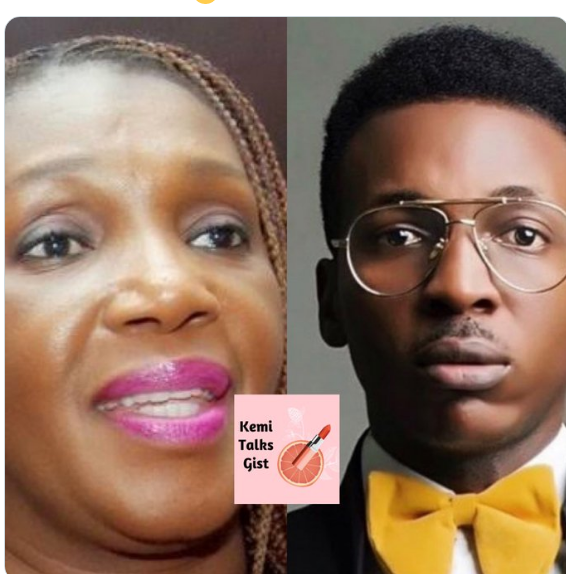 The death of the fast-rising gospel singer set social media flaming on April 9, 2022, as discussions and outrage applied over the reason for her death.

the Gospel musician Frank Edwards’ try to give a clarification on the issue infuriated Olunloyo as she classified him ‘stupid’ while alleging that he was the late singer’s Osinachi Nwachukwu hidden lover.
Kemi resorted to Twitter to slam the singer Frank Edwards for allegedly being Osinachi Nwachukwu’s lover which

eventually forced her husband nuts and possibly evolved the trigger for her death.

DR.PENKING™
@drpenking
Frank Edwards blamed the death of Osinachi Nwachukwu on domestic violence and Kemi Olunloye said that it happened because he Frank Edwards was Osinwchi’s secret lover and her husband was jealous of it. I hope Kemi is okay. Let the dead Rest In Peace.
Daniel Regha
@DanielRegha
Replying to
@tontebriggs
Frank Edwards is an artiste, there’s nothing wrong if he wants to work on a music project with someone’s wife, & he has no business with the lady’s husband whatsoever; The wife should be the one to inform her husband. Y’all should get real, it’s just a collab for crying out loud.
OSI.
@Osi_Suave
When you see men who are supposed to be modern and exposed saying shit like Frank Edwards is supposed to take permission from a Female artistes husband before they record a song. Then it’s fair to say that women pls open your eye before u lay with these men.
finewine
@switcandyyy
Kemi olunloye is an ekwensu, kemi olunloye is a sadist, kemi olunloye needs therapy. A woman dies out of domestic violence and the only thing u van ever think of, is that frank Edwards is her secret lover abi??? Chineke ga akpo gi oku kemi Chineke ga akpogi ezigbo oku
ATINUKE
@ThatGirlTinuke
I’m seeing talks bashing Frank Edwards for not speaking up. What right has he to speak up? He doesn’t have the consent to share such information. We should encourage victims and survivors to speak up instead. From the horses mouth is always the way
EMERALD
@nwadike_john
Replying to
@KemiOlunloyo
So what’s the connection here? Is Frank Edwards the reason the man killed his wife? We are talking about someone that was abused till she died and you are talking gibberish?
Daniel ethan
@Dannitrillions
Replying to
@KemiOlunloyo
Am not a fan of Ms kemi but how did Frank Edwards get all these Intels about a family he is not a member of..there’s no smoke without fire?why did he carry the matter on his head?Why d sudden revelation of secrets only him knows. am waiting to hear her family side of the story.
OSCAR
@osciano
Replying to
@JoysSparkle

@KemiOlunloyo
You rest, everyone think she is crazy but that woman Is the real goat, me know say that Frank na bad guy is only fake pastors and prophet programs he Dey go minister I mean pastors that are suspicious so think

@KemiOlunloyo
And why speak without attaching the receipt? The last time she made allegations, which proof did she bring? Y’all be giving this woman prestige
ABIOLA
@im_ProPeta
Teach your daughters that coming back home from a failed marriage is better than coming home in a coffin..If you die in the marriage, they will marry another to replace you immediately. Frank Edwards thanks for speaking out!
Everest
@novieverest
Aunty Kemi will never read the room. She seeks attention too much. Trying to use the death of Osinachi Neachukwu to sell her class. There’s nothing she has that links Frank Edwards to Osinachi, other than the class she intends to sell. Read the room Kemi.
Raymond
@IamTheIroko
Osinachi dies as a result of injuries sustained from beating by her husband but y’all are talking about a recording artist working with Frank Edwards and if she got permission or not. Do you see how society enables Domestic violence and how women can’t come out?
Recalcitrant Pessimist
@Meisterword
Christianity indirectly make people stay in abusive and toxic marriages like the one Frank Edwards talked about. The “for better or for worse,till death do us part” make christian stay in abusive marriages for fear of offending god should they choose to opt out
OMOTAYO Of Lagos
@Tee_Classiquem1
I can see people blaming Frank Edwards and Osinachi relatives for not doing more to save her from her abusive husband, see when it comes to husband and wife or relationship issue in general, there is only little you can do aside advice and pray for the victim to see the light

Next post Julius Agwu: Let His Side Chics Also Take Care Of Him, The Comedian Wife