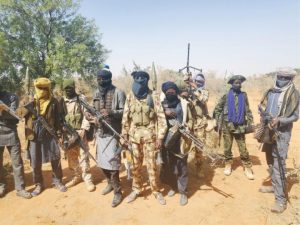 The gang was behind the abduction of the grandchildren of the Kadun State’s Commissioner for Finance.

A pregnant pharmacist has been shot dead by bandits in Kaduna state.
According to New Telegraph, she was killed by the bloodthirsty bandits because was walking too slow and delaying them.
The Force Intelligence Response Team (IRT) has arrested a 21-year-old suspected bandit, Umar Adamu alias Meagwua, for being part of the gang that shot and killed the woman.

The gang was behind the abduction of the grandchildren of the Kaduna State’s Commissioner for Finance.
The gang also carried out an attack on the National Leprosy and Tuberculosis Training Centre, Zaria, Kaduna State, where it killed eight people. The gang stormed the centre armed with seven arms; two General-purpose machine guns (GPMG) and five AK47 rifles.
The Force Spokesman, Frank Mba, while briefing journalists about the case, revealed that the gang’s leader, Isah Ibrahim aka Isah Danwasa, was still at large. Adamu was first arrested and then used as bait to catch the informant. After the gang attacked National Leprosy and Tuberculosis Training Centre, it went to Zangu, behind Ahmadu Bello University and attacked a house.
There the members kidnapped a pregnant pharmacist, Hanatu Rufai. While marching her to their hideout, they said she was not walking fast enough and then shot her to death. Mba said that the gang was also behind the abduction of Professor Alliu Mohammed, a professor at Abubakar Tafawa Balewa University, (ATU), Bauchi State. During the abduction of the Prof, the bandits killed his son.
The trigger-happy bandit was later identified as Nuha Aminu. The gang would later collect a ransom of N10 million before releasing Mohammed.
In another operation, the bandits attacked the owner of Najiwa Filling Station, kidnapped his wife and child, then collected N18 million as ransom. According to Adamu, he joined the bandits last year, but before then, he was a cattle farmer. It was in the course of his cattle farming that he met Isah, who is also a cattle farmer.
Adamu said: “Isah is also the person that used to supply our gang with guns. After every operation, he would give each of us N2000.
After collecting ransom from families of victims, he will ask us to come to the camp inside the forest to collect our share. I refused to go into the forest because my father warned me never to go into the bush.”The grandchildren of the Commissioner for Finance were also kidnapped, but Adamu insisted that he was not part of those that went for that operation.
He added: “I don’t handle guns; my job is to lead the gang out of the community because I know the terrain. After kidnapping victims, I’ll lead the bandits to where they park their motorcycles. Whenever they are coming to the village, they’ll park their motorcycles at a safe distance and then walk into the village.