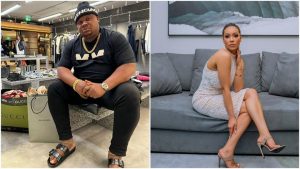 In an Instagram post on Sunday, Cubana Chief Priest accused Maria of also sending death threats to his sister.

Fans have issued a serious warning to alleged homebreaker, Maria.
This comes after the ex-Big Brother Naija housemate was called out by popular celebrity barman, Cubana Chief priest via his Instagram on Sunday for snatching his sister’s husband.
In an Instagram post on Sunday, Cubana Chief Priest accused Maria of also sending death threats to his sister.
In the now-trending post, Cubana claimed that the former housemate is hanging out with his in-law, known as Kelvin.
He also questioned the audacity of the beauty queen for threatening a married woman who has given birth to a male and female children for her husband.
According to Cubana Chiefpriest, Maria’s recent flaunting of dollars, Range Rover and wristwatch a few days ago was done to spite Cubana’s sister.
Sharing a video of himself spraying cash on his sister and in-law while they danced, Cubana Chief Priest said, “@grandfish1 @iam_lolofish_27 I get dollars for you, I get pounds for you, there is nothing sweeter than family. Wives stay woke, girls like @mariachikebemjamin are coming for your husbands. She stole my sister’s husband, as if it was not enough, she is sending her threats. That I won’t let it slide, Kelvin I Dey find una come that Dubai. Nothing must happen to my sister.”
Fans have now issued a warning to Maria.
See below:
yo.niq_ wrote; ‘Dear Maria, Kindly stay away from somebody’s husband . Atutu poyoyo, if that man give his wife that divorce letter , e go red for you . I just said I should warn you in advance . I come in peace.’
slamhitfactory rote: ‘Lol now y’all can see the source of those dollars she was flashing.’
essie_gwin wrote: ‘Maria leave him alone oooo! Stop threatening his wife.‘
monalisa_cyprian wrote: All of una wey Dey talk say Maria no need money from fans oya see am na

Next post Bandits Shoot Pregnant Pharmacist Dead For Being Sluggish