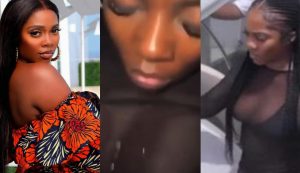 Tiwa Savage has modestly admitted she’s the one captured in the viral sex tape which she informed the general beforehand days before it was leaked on Monday night, October 18, 2021.

The Afrobeat specialist has previously owned up to having a sex video with her boyfriend which they mutually agreed to record but unfortunately, it got into the wrong hands. She then applauded faceless blogger Gistlovers for propagating the agenda of the blackmailer. “You must knock my head when you see me otherwise. Gistloversblog with my full chest.”

Ahead of the leak, Tiwa explained the video was accidentally posted on Snapchat by her lover who deleted it after he realized his error as the footage was swiftly downloaded by the blackmailer.

In an interview with American OAP, Angie Martinez of Power 105.1, the singer absolved her lover and other people close to her of deliberately leaking the video.

“I am not going to call it a sex tape but it’s a tape between me and the person I am dating right now…It is not from someone working closely with me. What happened is that the person did it on Snap and he posted it by accident, but he quickly deleted it.

”However, someone got it before he could delete it. It is a very short video, but it is me. It is going to be out there and I can just imagine the memes. I just found out yesterday. I could not sleep last night.”

The Nigerian songstress further added that the incident happened last month and that the person tried extorting money from her but that she was not going to allow anyone to blackmail her “for doing something that is natural.”

“I am that crazy I could put it out myself – you are not making any money off me,” she said.

The singer also said she tried to manage the situation to no avail. She said, ”We tried to stall them, but I later decided that I am going to own the narrative. I am not ashamed of it; this is someone I am dating; I am not cheating, neither is he. We are grownups.

”I cannot believe this is happening to me. I feel for my fans because they will have to keep defending me. I can switch off my phone or have someone run my account so I do not see that, but my fans will feel the need to protect me. I will like my fans to ignore it.”

Savage disclosed that the blackmailer sent the sex video of herself and her current partner to her team, demanding money. “So what happened was the person did it on Snapchat and he posted the tape by accident and deleted it but someone caught it…

“It’s a tiny clip but it’s me and it’s going to be out there forever. There are probably going to be memes.”

Next post #EndSARSMemorial Starts With A Car Procession At Lekki Tollgate