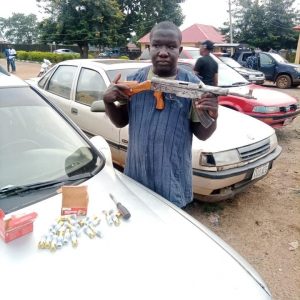 The Kaduna State Command of the Nigeria Police has arrested a notorious gun runner identified as Geoffrey Ayuba.

The suspect was arrested by operatives of the Kafanchan Divisional Headquarters on Wednesday, 28th July based on credible intelligence.

Ayuba was intercepted while driving his Opel Vectra vehicle with registration number KAF 733 MK and when a search was conducted, various dangerous weapons were found hidden in the car bonnet near the engine compartment.

According to the State Police Public Relations Officer (PPRO), ASP Muhammed Jalige who confirmed the incident in a statement, one AK-47 rifle and two packs of pump-action cartridges were hidden in the bonnet of the suspect’s car.

The statement further said that weapons concealed in the engine compartment of the car were recovered by the operatives after a careful search of the vehicle.

“Investigations are ongoing as the suspect has provided useful information to the Police that will facilitate further breakthroughs,” the statement added.