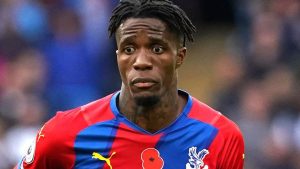 The 28-year-old posted a series of racist messages he had received on Instagram saying he wanted action over the issue rather than sympathy.

Crystal Palace star and Ivory coast international Wilfried Zaha has responded to racist attacks he suffered online.
According to him, he will always be black and proud.
Zaha used the opportunity to call on authorities to take racism seriously after he was racially abused after his club’s 2-0 win over defending premier league champions,  Manchester City.
The 28-year-old posted a series of racist messages he had received on Instagram saying he wanted action over the issue rather than sympathy.
According to him he said: “I’m not here for all the nonsense that is being done instead of fixing the actual problem!”
“I don’t mind abuse because nowadays it comes with doing the job I do even though it’s not an excuse but my colour will always be the real problem, it’s fine because I’ll always be BLACK AND PROUD!

“This message isn’t for me to get a million messages saying we stand with you and it’s disgusting or about me getting sympathy,” Zaha wrote on Instagram.

Zaha told the authorities to only talk to him when they have taken actions against the offenders.
Wilfried Zaha became the first player to score 50 top-flight goals for Crystal Palace on Saturday night, October 30 as they beat 10-man Manchester City with a 2-0 defeat at Etihad Stadium.
Man City’s Aymeric Laporte was sent off by referee Andre Marriner in first-half stoppage time when he committed a professional foul by bringing down Wilfried Zaha 35 yards from the City goal