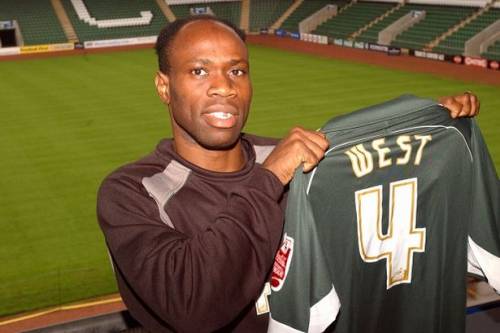 I Was Asked To Join A Cult To Get Political Position, Says Taribo West.

A running mate to a governorship aspirant in my state (Rivers), brought me money and told me to join their cult. He told me if I wanted power, they would give me the position, and that if I wanted money, I would be given it. But he insisted that I must be involved in their cultism activities.”

Taribo West, a former Super Eagles defender, has revealed that a running mate to a governorship aspirant in Rivers State, asked him to join a cult before he would be given a political position in the state.

The former defender said this in an interview with The Punch newspaper, published on Sunday.

While reacting to the question of if the lack of educational qualification of sportspersons was the reason for their exclusion in sports administration, West said Nigeria is the only country where other professionals are encumbered with different criteria to ascend the peak of their careers, while uneducated people can freely become politicians.

He said: “In Nigeria, is it every politician that went to school? Some can’t even write their names. But it’s only in my country that those in positions use demonic criteria to keep people away. In other countries, if you are competent for the job, they will give it to you.

“I have been involved in the political system and things like this discouraged me from it. If it means I have to be a cultist to get a position, I’m not ready for that. I’ll prefer to drink my garri at home and be free with God. At the time I was in politics, a running mate to a governorship aspirant in my state (Rivers), brought me money and told me to join their cult. He told me if I wanted power, they would give me the position, and that if I wanted money, I would be given it. But he insisted that I must be involved in their cultism activities.”

He also said he was available in the state to groom young footballers, but he was not given the opportunity to operate freely because he was not in a “caucus”.

West said: “I’ve made myself available for Rivers State for so many years. But if you are not their member, they won’t give you anything to do; they won’t involve you. You have to belong to a caucus; it’s at all levels. I have personal experiences, so I know. Nobody will look at you if you are not involved. They know that someone like me will disturb their activities, so they won’t get me involved. I’m the only big name in sports in my state that they don’t call for anything. So, it’s painful but hopefully, someday this will end.”

He advised President Muhammadu Buhari to elect a better Sports Minister who would pay equal attention to all the sports and not just football.

“I don’t think we’ve made progress in the area of sports. There’s more to sports than just football, but the focus of the sports ministry in recent times has been on football. Where are our basketball, athletics, and other sports? I pity the President of the Nigeria Wrestling Federation (Daniel Igali). Anytime he has an international event, you’ll find him on national television crying for funds.

SEE ALSO: The Rise and Decline of Mark Zuckerberg

“Most of the retired athletes are suffering, some have been diagnosed with various diseases but there’s no medical team to help them from the ministry or anywhere else. So, when Buhari reorganizes his cabinet, I want him to look at the sports world, make changes and reorganize the sports ministry. Sports is a big business that the government can benefit from. The President [appoint] someone who knows about sports, someone who can bring about mass restructuring, stability, and prosperity to that department.”