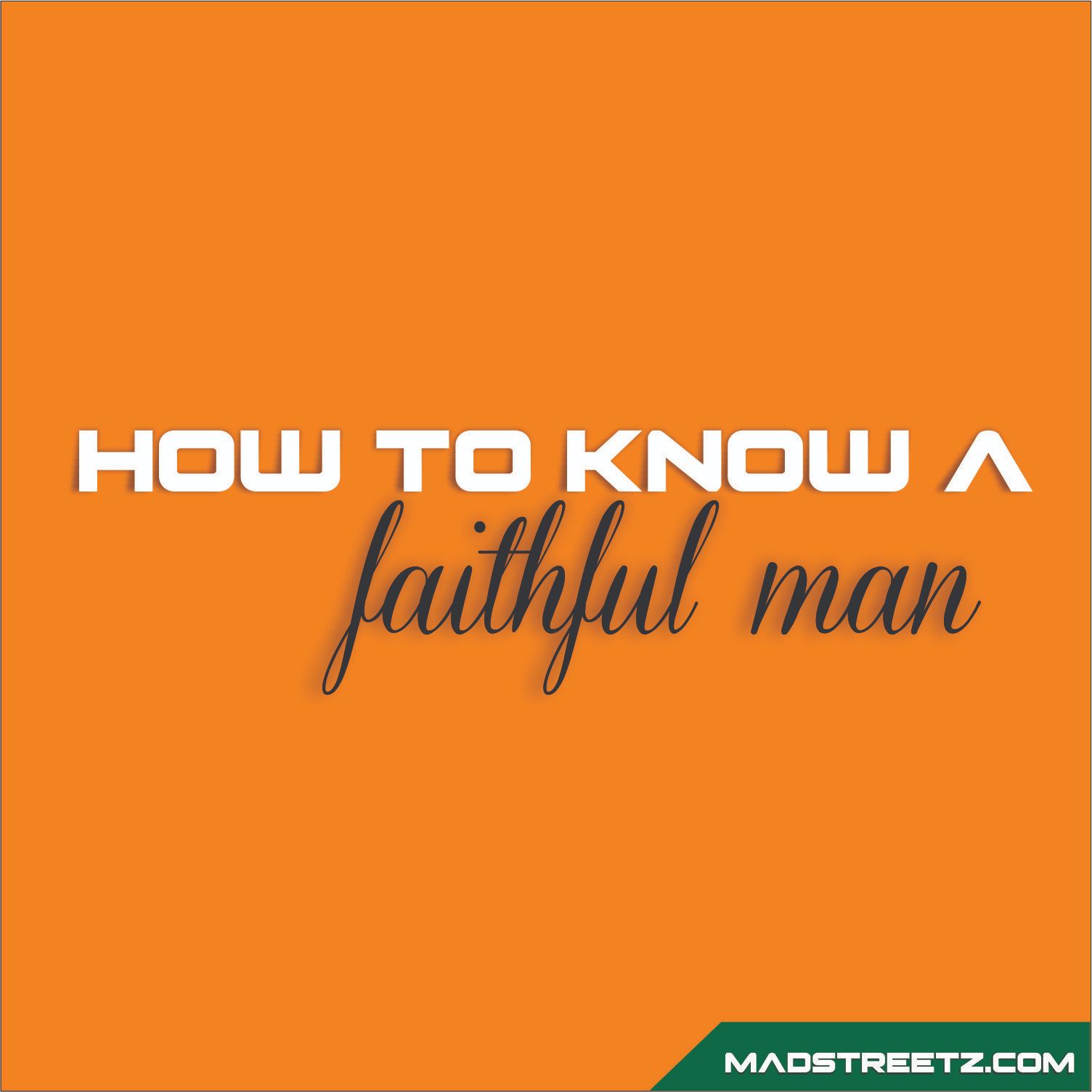 Relationship: How To Know A Faithful Man

Who is a Faithful Man?

This has been a question plaguing the innocent minds of multiple women on the surface of the earth. It is no news that women are the most emotional of both genders, and this, in a scary turn of events, might also be the reason for the high level of promiscuity and infidelity amongst women. They need to be with a trusted someone for that emotional reliability.

Women of a fact will always need that one person whom they can count on for emotional support and security and as soon as a man has proven himself to be that person, chances are that a woman automatically places that responsibility on this lucky man. For this reason, women are very loyal and faithful for as long as these needs are met.

There is no Friendship Between a Man and Woman – Oscar Wilde

The same cannot be said of men, men have been proven to be biologically prone to having an attraction to a variety of women concurrently. The needs of a woman in the emotional space are quite realistic compared to a man whose needs might be almost insatiable in the search for a perfect woman. It, therefore, takes a whole lot of self-awareness and strong will for a man to stay true to one woman. We do believe that a man grows into that mental state; deciding to be with one woman. But for a woman, how would you then know when a man has reached this level of self-consciousness? I have some thrilling points below.

Religion is a major factor that would influence decision-making in almost anyone. Websters also defines religion as an organized system of beliefs, ceremonies, and rules used to worship a god or a group of gods. This means that in most cases, a man operates according to his beliefs and traditions. If his God or gods believe in having more than one woman, he is not going to see anything wrong with it. The beliefs of any human being are critical to how he or she handles day-to-day decision-making. So religion plays a major role in the life of a man. As religion is capable of influencing one’s actions, so also is a person’s background or society. Take for instance a man who was raised in a polygamous home, he must’ve considered polygamy a couple of times except if bewildered by its disadvantages. Luckily, Religion is not a total disadvantage as a man is capable of knowing good from bad from his morals and standards, religion can be misleading or misunderstood and thankfully a lot of men are breaking out of the shackles of religious misinformation. Your job is to detect men like these.

2. If He is Trying To Please Everybody

A man who tries to please everybody is a man destined to fail everybody. Just imagine a man in a relationship who enjoys pleasing everybody so bad that he would not say No. He is doomed to fail in the face of persistent advances from a lady because he would feel bad for hurting her feelings simply by turning her down. Aside from the demerits of such behaviors in a relationship, such a man might impede his success while investing so much energy in focusing on others instead of focusing on his dreams, life, loved ones, and perhaps, his special woman. Such a man is not ideally qualified to be faithful.

It is a good thing for a man to care about your goals or his goals for you, your career, health, and in many cases, body or physic. The saying is true about men falling in love with what they see and women with what they hear, this is probably why women constantly need reassurance. Men in most cases often are the ones who suggest career paths for their women and very commonly, work out at the gym. Most women who think up physical exercise either to lose weight or stay fit are mostly the ones trying to get back in good shape and feel confident probably after a breakup, it is rarely a lady’s priority in the early stages of her life. Every man wants a woman they can show off and ultimately brag about and because of this, most men put pressure on their women, and pressures like these can be mentally denting and cause a feeling of unworthiness in a woman. The change in a woman’s body has been responsible for the changes in attitude in most husbands but this will never be talked about out of respect and sensitivity in talking about a woman’s body. Isn’t it just hypocritical? The good thing about this is that many men out there would allow you to take your time and move in your own space, making plans that will benefit you and your body, but you need to know his views about this from inception.

Watch out for men with habits such as addictive gambling, excessive drinking, and hanging out with friends involved in unproductive events, constantly and ultimately one who enjoys keeping to himself when he is not with friends. Productive events include outdoor sports, gaming, and also business discussions.
A gambling man who doesn’t know how to put his emotions in check will cause problems for his woman, the mood swings that come with having your teams lose alone can ruin a relationship vibe, losing money comes with aggravated anger in some men, and depending on how a man deals with downtimes, men in most cases finds comfort in the bottom of unfamiliar women.

Women are emotional and ultimately considerate beings, hence they tend to make plans to endure things, but it rarely turns out for the best. It is advisable to make your findings and settle for a man closest to what you would rather benefit than manage.