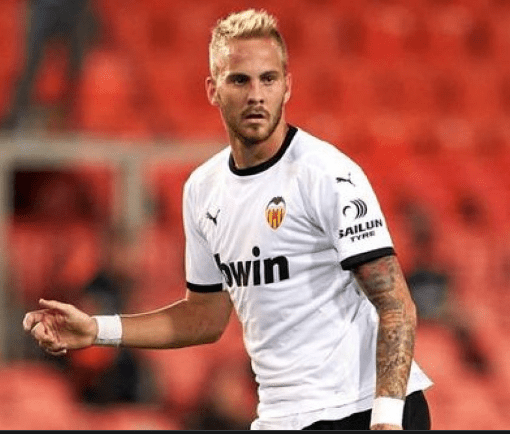 Uros Racic, born on March 17, 1998. He is a Serbian professional footballer, who plays as an attacking midfielder for La Liga club Valencia and the Serbia national team.

A Quick Glance At Uroš Račić

In Kraljevo, Racic started playing football at the local football academy “Bambi” and “Knjaz” together with their twin

brother Bogdan. After three years of paying for Altina football academy in Zemun twins returned to Kraljevo to join Sloga Kraljevo. They also played for Sloboda Cacak, before joining OFK Beograd. After two years playing with the youth team, Uros was also allowed to join the first team of this season. After scoring an assist for the youth team during a game in a match against Red Star Belgrade for 4:1 victory, Uros moved in opponent team alongside his twin brother. They signed a professional contract for three years for the club Red Star on 13 March 2016.

Racic began his career for Red Star Belgrade on 8 May 2016 in a friendly fixture against Olympiacos. On the 14th of May, 2016 Racic was able to make his SuperLiga debut in an away match in a match against Radnik Surdulica, coming on as substitute for Aleksandar Katai.

In the 2017 summer’s pre-season, Racic was presented as one of the club’s top 10 young prospects. In July of 2017 Racic was the first player to make a appearance in Europe for the club in the second leg of the qualifying round of 2017-18 UEFA Europa League, in the 3-3 match against Floriana. Racic had his very first goal of senior status in the match for Red Star Belgrade in a 3-1 win against OFK Backa on 13 August 2017. The day before the end of the

summer transfer window of 2017, Racic extended his contract with Red Star to 30 June 2021. The goal was scored during a win of 2-1 against Mladost Luciani during the fourteenth game in the Serbian SuperLiga campaign. The goal was declared goal of the week during the Serbian SuperLiga domestic competition and he was awarded the prize of a wristwatch. On May 5, 2018 Racic received a foul for the penalty kick that came in the form of Dejan Joveljic during a 4-0 home win against Spartak Subotica. He scored and helped teammates Nemanja Radonjic in the final game of the season against Vozdovac on May 19th, 2018.

Racic was signed by Valencia at the end of the season of the year 2018, following an EUR2.2 million deal of Red Star Belgrade. On June 13, 2018 the club signed him to the four-year contract but it was assigned to the B-team of Segunda Division B. A fixed-rate clause of €100 million was included in the contract.

On the 4th of December, 2018 Racic played his first game in the Spanish league for Valencia in a 1-0 victory against CD Ebro in the Copa del Rey.

On the 14th of January, 2019 Racic received a loan from Segunda Division side CD Tenerife until the close in the current season. Then, he was loaned out by Portuguese side FC Famalicao in August 2019.

On the 13th of September, 2020 Racic made his debut as substitute for Valencia’s opening fixture of the 2020-21 La Liga season home against Levante in an 0-4 win.

As a player of the Serbia national team of under-18 football Racic participated in several matches during 2016 and scored a score in a match against Armenia in a game played on the 15th of March in 2016. In August of 2016, Racic was called into Serbia U19 team for the Memorial tournament “Stevan Vilotic – Cele” and he

made his debut in the first match in the match against United States. Racic made his debut goal with the the U19 Serbian team using an injury-time penalty kick in an international friendly game against Georgia that was played on October 8th, 2016. Racic scored in the final test match before the elite qualification round for the 2017 UEFA European Under-19 Championship, against Bosnia and Herzegovina on 9 March 2017. Racic received his first invitation in the Serbian under-21 squad by the coach Goran Dorovic in December of 2017. Racic made his first appearance with the team in an away game against Qatar on 17 December 2017.