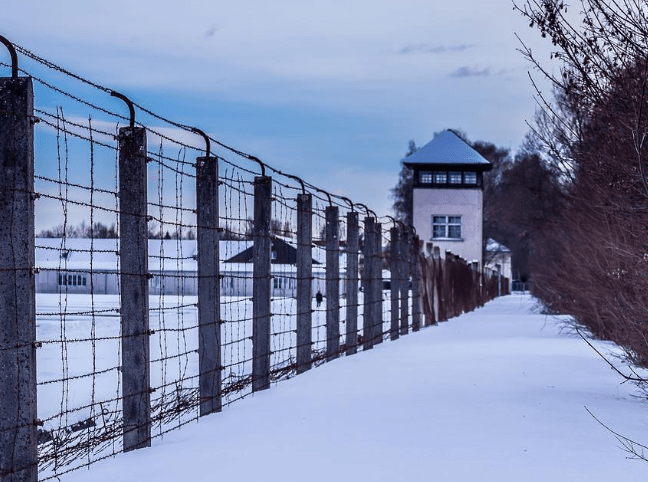 In her new book, Emma Craigie uncovers the heartbreaking story of 12-year-old Helga Goebbels, who was killed by her parents in the Berlin bunker as the Nazi empire crumbled.

It was the loneliness of the 12-year-old that first drew me to Helga Goebbels. She was the oldest of the six children taken by their parents, Joseph and Magda Goebbels, into Hitler’s Berlin bunker on April 22, 1945. Their tale had barely been written about and had never been the subject of a book. I decided to tell their story from Helga’s point of view. My breakthrough was the discovery of an untranslated memoir of their governess, Kathe Hubner, who worked for the Goebbels family for the last two years of the Second World War.

Faced with the inevitability of defeat, Goebbels, the Nazi Propaganda Minister, had determined to await defeat and death alongside the Fuhrer. Other leading Nazis had protected their children by sending them into the mountains or out of the country, but Magda Goebbels decided that she and the children would join her husband to bring their lives to what she called “the only possible and honorable conclusion”.

Inside the bunker Magda could hardly bear to see her children, bursting into tears after every encounter with them. She played patience compulsively and took to her bed. It was left to Traudl Junge, one of Hitler’s secretaries, to look after them. Junge survived the war, and later recalled that the children were “happy and cheerful… They knew nothing of the fate awaiting them, and the adults did all they could to keep them unaware of it… Only the oldest, Helga, sometimes had a sad knowing expression in her big, brown eyes… Sometimes I think with horror that in her heart the child saw through the pretense of the grown-ups.”

I was horrified by the thought of this young girl, sensing the danger of the situation, sensing the dishonesty, the untrustworthiness of her parents and the other adults, but unable to share her fears with her unsuspecting younger siblings. I wanted to build up a picture of Helga’s life before the family entered the bunker. I turned first to the private diaries which Joseph Goebbels wrote almost every day of his adult life. His focus is on his own importance in public events and his children feature rarely. When they do, he shows a chillingly distant delight in them: “I speak to the children on the telephone. They are all so sweet. How attached one can become to such tiny, insignificant beings!”

SEE ALSO: A New Independent Nation Might Suffer These Challenges

Kathe Hubner’s story, recorded in Die Kinder des Reichministers, gives a much more vivid and intimate picture of the Goebbels family life during the war. Hubner confirms the view that Helga alone saw through the lies of the adults and, unlike her younger siblings, “would not let herself be comforted by her mother’s words when she said that Hitler would defeat his enemies”.

For a bright 12-year-old, the signs of the desperation of the situation must have been obvious. Women and children who were fleeing from the advancing Russian army streamed past their homes, bringing stories of atrocities. Hubner also recalls Joseph Goebbels’ insensitivity to his children’s feelings and how this could undermine their mother’s attempts to reassure them.

At the end of 1944, he commissioned a propaganda film about his two oldest girls, Helga and Hilde, visiting a military hospital, and giving the soldiers flowers. The girls were so visibly horrified by the mutilated patients that the project had to be abandoned.

From 1944-45 the children lived with Hubner, a nanny and their grandmothers in the Goebbels’ rural residence of Waldhof am Bogensee. Joseph was mostly in Berlin, Magda often with him. Hubner describes the excitement of the children when he came home, but also how he “liked to tease the children”, particularly the only boy, nine-year-old Helmut.

Both grandmothers lived in log cabins on the Bogensee estate. Magda’s mother Auguste, who avoided all contact with Joseph, whom she hated, was suicidal and alarmed Hubner, and presumably the children, with her constant wailing. Every Sunday the children would visit their Goebbels grandmother and sing to her. Katherina Goebbels was very critical of her son the Reich Minister, always asking in her strong Rhineland accent, ‘”What has that boy done now?”

According to Hubner, Magda Goebbels attempted to hide her worries from her children whenever she was there. Only Helga “sensed it a bit”. Despite her efforts to keep cheerful, Magda, like many of the leading Nazis, succumbed to nervous ailments and depression. She had always had problems with her heart, but now, Hubner recalls, the right side of her face became paralyzed. She spent weeks on end away from the children in a Dresden sanatorium. When at home, Hubner remembers her walking through the great hall listening to Gluck’s tragic opera, Orpheus and Eurydice, which echoed throughout the house, “I wish I had never been born/ Alas that I am on earth.”

Hubner’s memoir contains a number of personal photographs of the family. We see Helga, just before her 12th birthday, with her dark plaits and smocked dress, picnicking with her brother and sisters, cuddling a doll. She looks very young for her age. In another picture she is sitting on a wall beside Hubi, as they called her, holding a tiny puppy on her lap. Her long, thin legs dangle down, legs which are recognizable in the terrible autopsy photographs taken by the Russians.

The pictures give the impression of a hesitant, sensitive girl – the very opposite of the feisty child of earlier photographs, one of which we chose for the cover of Chocolate Cake with Hitler. Here Helga, aged three, is sitting on a bench beside the sea. Next to her is Hitler. He is leaning right over her, his hands clasped tightly between his legs. Helga stares fiercely at the camera. She has turned right away from him. Her legs are firmly crossed. One hand is clamped down on them, the other clings to the back of the bench. She is having nothing to do with the Fuhrer.

SEE ALSO: List of Nations Who Broke Out of Their Original Colonies

Helga was always said to be Hitler’s favorite little girl. Hubner refuses to comment on this, saying only that it is a question that journalists have always pestered her with – she always refused to answer their questions – and that Hitler was friendly to all children.

Whatever Hitler felt about Helga, her feelings about him are evident in another early photograph, also taken when she was three. The occasion is Hitler’s birthday. A queue of people is lined up to shake his hand. When Helga gets to the front she backs off. The picture shows her standing with her back to a closed-door, her hands tightly clasped together in front of her chest.

There was no sign of such rudeness in the bunker. Traudl Junge stresses how well behaved all the children were during their 10 days there: drinking hot chocolate every day with Hitler, telling him about their school work, apparently taking no notice of his increasingly odd behavior, his rants against his generals, and the reverberating bomb blasts.

It was only at the very end of her life that Helga’s rebellious spirit resurfaced. When Magda put the children to bed on May 1, 1945, she told them that they needed an inoculation. In fact, they were injected with morphine by an army dentist, Dr. Kunz. Magda wanted him to help her give the children cyanide once they were asleep, but he refused. She turned instead to one of Hitler’s doctors, Ludwig Stumpfegger, who helped her crush cyanide tablets between the children’s teeth as they slept.

Magda and Joseph then left the bunker and went up and out to the garden of the Reich Chancellery. She took a cyanide tablet and, to make doubly sure, he then shot her with a pistol, before turning it on himself.

When the first Russians entered the bunker two days later they discovered the children’s bodies. They were lying in their beds wearing white nightclothes, completely unmarked, except for Helga. According to the autopsy the Russians carried out, bruising on her face indicated that force had been needed to administer the cyanide to her. In the very end, this powerless, isolated child had rediscovered her spirit of resistance.

InBogensee, Emma Craigie
Previous post THE DIARY OF A SLAY QUEEN WHO JUST GOT MARRIED