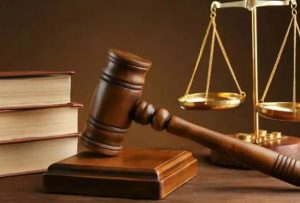 The suspects were charged with criminal conspiracy and causing miscarriage.

Two men who allegedly procured an ab*rtion for a pregnant woman have been remanded in a correctional centre by a Magistrates’ Court in Ilorin on Friday.

Magistrate Abayomi Muyiwa ordered that they should be remanded in Oke-Kura correctional centre.

Magistrate Muyiwa adjourned the case until November 4 for further mention.

The direct complaint was filed by Mrs. Victoria Okoduwa, the Kwara Chairperson of the International Federation of Female Lawyers.

She said that Ibrahim impregnated a woman (name withheld) and lured her to a patent medicine store at Isale Aluko owned by Adeyinka for an ab*rtion.

She alleged that Ibrahim also admitted that he took the victim to Adeyinka, who administered some drugs and injections on her which resulted in the pregnancy termination.