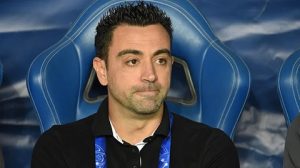 A deal by Saudi Arabian club, Qatari Al Sadd to release Xavi Hernández so that he can join Barcelona as coach has been confirmed.
The club confirmed the deal on Friday, according to Guardian UK.
The club added that it has reached agreement with Barcelona to terminate Xavi’s contract with the Qatari club Al Sadd.
The 41-year-old, who made the last of his 767 Barcelona appearances in 2015, will succeed Ronald Koeman with the team struggling in La Liga.
Al Sadd said on Friday that they had“agreed on Xavi’s move to Barcelona after the payment of the release clause stipulated in the contract”.
Barcelona’s president, Joan Laporta, started discussions some weeks ago with Xavi, who made clear he was ready to accept an offer to return to the Camp Nou, but negotiations with Al Sadd took longer than expected.
Xavi came through Barcelona’s academy and is one of the club’s most celebrated and decorated players. His career as a manager began at Al Sadd in May 2019 after he ended his playing days there and last month he led the team to victory in Qatar’s Amir Cup final.
Barcelona sit ninth in La Liga and dismissed Koeman after defeat at Rayo Vallecano. Sergi Barjuan has been in interim charge, overseeing a draw at home to Alavés and a win at Dynamo Kyiv that has the team second in their Champions League group. He is in line to take charge at Celta Vigo on Saturday before handing over to Xavi.
Al Sadd’s CEO, Turki al-Ali, said: “Xavi informed us a few days ago of his desire to go to Barcelona at this particular time, because of the critical stage his hometown club is going through, and we understand this and decided not to stand in his way.”

Next post Police Officer Stabs Colleague To Death In Bayelsa