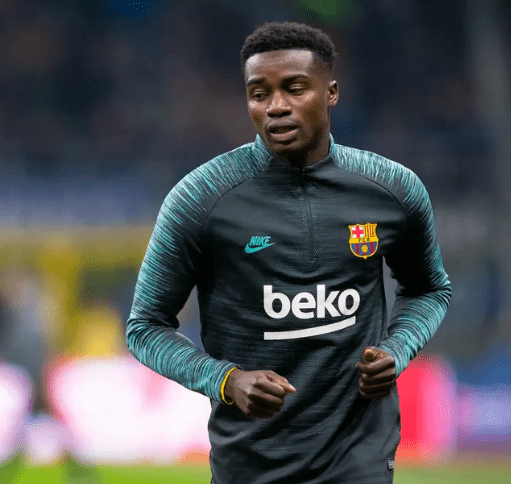 Moussa Wague, born the 4th of October in 1998. She is Senegalese professional footballer, who is a right back for La Liga team Barcelona and also for the Senegal nation’s team.

Wague has joined K.A.S. Eupen at his time at the Aspire Academy in November 2016. He made his debut for the

professional team with a 0-1 defeat against Genk on the 21st of January, 2017. Wague played two seasons for Eupen with

head coach Claude Makelele, helping the team stay at the top of the Belgian top division.

In August of this year, Wague completed a transfer from Eupen to FC Barcelona, for a cost that was EUR5 million. He was initially a reserve player prior to the start of this season. On January 13, the 13th of January, 2019, Wague made his debut goal with Barcelona B in a 2-0 victory during the miniestadi match with CD Alcoyano.

Barcelona Manager Ernesto Valverde named Wague as one of five promising youngsters to whom he would like to provide first-team chances. Wague began his professional team debut on the 6th of March, 2019, and he played all 90 minutes in the Catalan Super Cup against Girona. On April 13, 2019 Wague made his debut the La Liga match against Huesca in which he played for a complete 90 minutes. He said it was an “dream come true”. Wague was back in the team’s first on the 4th of May 2019, impressing in spite of Barcelona’s loss of 0-2 to Celta Vigo. Wague would be back at the Barcelona‘s La Liga finale, coming in as a second-half substitute during a draw against Eibar.

Wague was appointed to the first team prior to the start of the 2019-20 season and assigned an official number 16 jersey. The player made his first Champions League start for Barcelona on December 10, 2019, when his team beat Inter Milan 2-1.

On the 31st of January, 2020, French club OGC Nice agreed to a loan transfer with Wague and he was to keep him until the conclusion of the season 2019-20 as well as an option to purchase the club for 15 million euros. Wague made his debut for Nice during their 1-1 win against Lyon on February 2, 2020. He made his debut as a substitute for the second half. On March 7, 2020 Wague played the winning contribution in Nice’s derby win 2-1 against their arch-rivals AS Monaco. Following the suspension from the Ligue 1 season due to the outbreak of COVID-19 in France He returned to Barcelona following the decision of Nice chose not to use their buy-out option.

On the 21st of September, 2020 Barcelona approved the loan to Wague to Greek club PAOK in loan terms for the remainder of the campaign. On the 13th December of 2020, Wague suffered a serious knee injury in PAOK’s local derby match against Aris Thessaloniki. In the end, the team was set to lose nine months of play.

Wague played for the Senegal U20s team that finished 4th in the 2014 FIFA U-20 World Cup. He made his first international appearance in an friendly 1-1 match against Nigeria on the 23rd of March, 2017.

In June of this year, Wague was named in Senegal’s 23-man roster for 2018’s FIFA World Cup in Russia. Wague became the youngest African goal scorer to score a goal in World Cup history when he scored in the match between Senegal and Japan.

Wague was a member of Senegal at the 2019 Africa Cup of Nations that was held in Egypt. He was a part of the initial two games in the group stage and the final match of the Senegal team that made it to the final of the tournament.