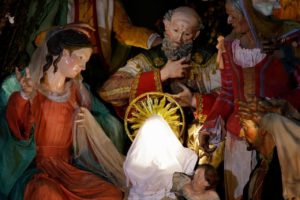 There are clearly good reasons to doubt Jesus’ historical existence.

A partial view of the Nativity scene unveiled in St. Peter’s Square at the Vatican, Tuesday, Dec. 24, 2013. (AP Photo/Gregorio Borgia)

Did a man called Jesus of Nazareth walk the earth? Discussions over whether the figure is known as the “Historical Jesus” actually existed primarily reflect disagreements among atheists. Believers, who uphold the implausible and more easily-dismissed “Christ of Faith” (the divine Jesus who walked on water), ought not to get involved.

Numerous secular scholars have presented their own versions of the so-called “Historical Jesus” – and most of them are, as biblical scholar J.D. Crossan puts it, “an academic embarrassment.” From Crossan’s view of Jesus as the wise sage to Robert Eisenman’s Jesus the revolutionary, and Bart Ehrman’s apocalyptic prophet, the only thing New Testament scholars seem to agree on is Jesus’ historical existence. But can even that be questioned?

SEE ALSO: Jesus Wasn’t White And Here’s Why That Matters

The first problem we encounter when trying to discover more about the Historical Jesus is the lack of early sources. The earliest sources only reference the clearly fictional Christ of Faith. These early sources compiled decades after the alleged events, all stem from Christian authors eager to promote Christianity – which gives us reason to question them. The authors of the Gospels fail to name themselves, describe their qualifications, or show any criticism of their foundational sources – which they also fail to identify. Filled with mythical and non-historical information, and heavily edited over time, the Gospels certainly should not convince critics to trust even the more mundane claims made therein.

The methods traditionally used to tease out rare nuggets of truth from the Gospels are dubious. The criterion of embarrassment says that if a section would be embarrassing for the author, it is more likely authentic. Unfortunately, given the diverse nature of Christianity and Judaism back then (things have not changed all that much), and the anonymity of the authors, it is impossible to determine what truly would be embarrassing or counter-intuitive, let alone if that might not serve some evangelistic purpose.

The criterion of Aramaic context is similarly unhelpful. Jesus and his closest followers were surely not the only Aramaic speakers in first-century Judea. The criterion of multiple independent attestations can also hardly be used properly here, given that the sources clearly are not independent.

Paul’s Epistles, written earlier than the Gospels, give us no reason to dogmatically declare Jesus must have existed. Avoiding Jesus’ earthly events and teachings, even when the latter could have bolstered his own claims, Paul only describes his “Heavenly Jesus.” Even when discussing what appears to be the resurrection and the last supper, his only stated sources are his direct revelations from the Lord and his indirect revelations from the Old Testament. In fact, Paul actually rules out human sources (see Galatians 1:11-12).

Also important are the sources we don’t have. There are no existing eyewitnesses or contemporary accounts of Jesus. All we have are later descriptions of Jesus’ life events by non-eyewitnesses, most of whom are obviously biased. Little can be gleaned from the few non-Biblical and non-Christian sources, with only Roman scholar Josephus and historian Tacitus having any reasonable claim to be writing about Jesus within 100 years of his life. And even those sparse accounts are shrouded in controversy, with disagreements over what parts have obviously been changed by Christian scribes (the manuscripts were preserved by Christians), the fact that both these authors were born after Jesus died (they would thus have probably received this information from Christians), and the oddity that centuries go by before Christian apologists start referencing them.

Agnosticism over the matter is already seemingly appropriate, and support for this position comes from independent historian Richard Carrier’s recent defense of another theory — namely, that the belief in Jesus started as the belief in a purely celestial being (who was killed by demons in an upper realm), who became historicized over time. To summarize Carrier’s 800-page tome, this theory and the traditional theory – that Jesus was a historical figure who became mythicized over time – both align well with the Gospels, which are later mixtures of obvious myth and what at least sounds historical.

The Pauline Epistles, however, overwhelmingly support the “celestial Jesus” theory, particularly with the passage indicating that demons killed Jesus, and would not have done so if they knew who he was (see: 1 Corinthians 2:6-10). Humans – the murderers according to the Gospels – of course, would still have killed Jesus, knowing full well that his death results in their salvation, and the defeat of the evil spirits.

So what do the mainstream (and non-Christian) scholars say about all this? Surprisingly very little – of substance anyway. Only Bart Ehrman and Maurice Casey have thoroughly attempted to prove Jesus’ historical existence in recent times. Their most decisive point is? The Gospels can generally be trusted – after we ignore the many, many bits that are untrustworthy – because of the hypothetical (i.e. non-existent) sources behind them. Who produced these hypothetical sources? When? What did they say? Were they reliable? Were they intended to be accurate historical portrayals, enlightening allegories, or entertaining fictions?

Ehrman and Casey can’t tell you – and neither can any New Testament scholar. Given the poor state of the existing sources, and the atrocious methods used by mainstream Biblical historians, the matter will likely never be resolved. In sum, there are clearly good reasons to doubt Jesus’ historical existence – if not to think it outright improbable.

Previous post She Gave Birth To The World’s First Surviving Septuplets, They Have Turned 21 Now