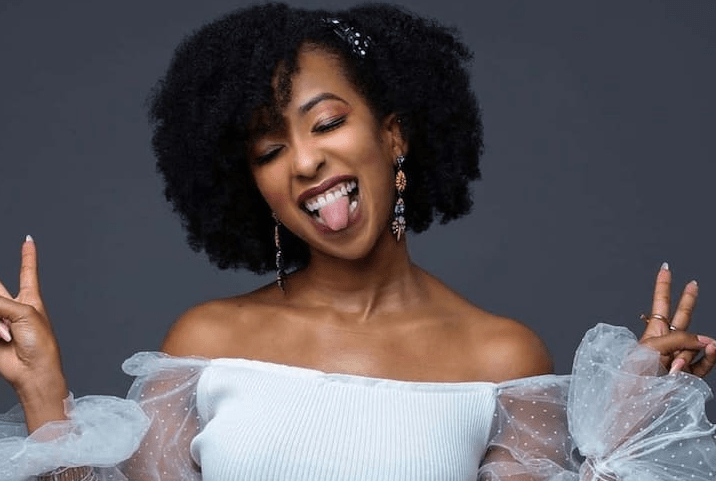 Natalie Tewa who goes by the alias Natalie Tewa is a renowned Kenyan YouTube content creator. The name Tewa is a nickname she got from her younger brother and she went on to build her brand around it. Her Youtube videos have amassed over 5.5 million views. The content varies from her natural hair journey, traveling, skincare, health, and fitness.

A Quick Glance At Natalie Wanjiru

How Old is Natalie Tewa?

Natalie attended Makini Primary School, Precious Blood High School, and Brookhouse International School. She then proceeded to the University of Leeds, the United Kingdom to pursue a Degree in Architectural Engineering.

The content creator has two elder step-sisters and a young brother who is 15 years old.

The beautiful lass worked for a construction company as a project manager for about two and a half years before she quit to concentrate on building her brand.

Natalie started her YouTube channel in 2015 in order to document her fitness journey. However, the channel picked pace after she started creating content about her natural hair journey. This was because a lot of women at the time were focusing more on their natural hair.

“ I started my YouTube channel in 2015. I wanted to document my fitness path while I was doing the two-month insanity program to kick start my journey. I was also hoping to inspire someone out there. With this new fitness expedition, I started my natural hair journey and that is what made my channel pick up. Many girls at the time had decided to stop using chemicals on their hair, just as I did,” she told Daily Nation in 2018.

The social media influencer told the same daily that she was creative from a very young age.

“I have always had a thing for creating. When I was younger I loved to draw and write. I was also very crafty. Then I discovered my love for creating content. I genuinely love creating and editing videos, and YouTube was the perfect platform for me to generate my skill,” she said.

Today, the channel has grown and has more than 80k subscribers. The content varies as mentioned in the introduction and what’s more, is that she answers questions posted by fans on her videos. The interaction with her followers has given her an edge over other YouTubers who post videos and leave it at that.

In a past interview, she said her greatest challenge is facing criticism from other people but this is the case with so many creatives out there, they won’t be everybody’s cup of tea.

Who is Natalie Nwangi’s Boyfriend?

The vlogger is not married but a while back she had a public relationship with Ugandan photographer popularly known as Rnaze. The two documented their love on social media and served fans with a couple of goals. However, in 2019 they had a very nasty public break-up with Rnaze accusing Natalie of cheating and the YouTuber accusing him of physical abuse.

“ I was basically physically abused yesterday (Tuesday). If anyone saw what happened please speak out. Men should not ever get that far no matter what. If you know Rnaze you know he ain’t shit. Brokest nigga I have been with, always prancing around creating a façade. Selfish AF and always riding on my wave to be famous. If you know you know,” she posted on her social media.

Rnaze on the other hand posted that he went on a trip and upon returning found out she was cheating.

“ She cheated, I ended it. Came back from UG to a terrible surprise. I was only gone for 4 days… smh. That’s the truth,” he wrote.

The two had been creating content together and had managed to get Natalie over 30k YouTube followers and more than 65k on Instagram. Natalie went on to say that Rnaze had deleted some of her posts and the only videos in the channel were the ones from before they became an item.

Recently, the creative was rumored to be in a relationship with Mombasa governor Ali Hassan Joho. Speculations began when the governor traveled to Dubai with a private jet and a brown handbag was spotted by social media detectives beside the governor’s seat. Many thought it was Betty Kyallo’s as the two had been an item before but Betty rubbished the rumors, she hadn’t even left the country.

Edgar Obare claimed it was Natalie Tewa who was in Dubai at the same time and was spotted with the handbag in question. Of course, Natalie has not addressed the rumors but her post after that was that everyone should be allowed to live their own life. The notification for the post was turned off.

Natalie took Edgar Obare to court for disclosing her personal data. The vlogger was released on a kes100,000 cash bail which almost rounds up to $850.