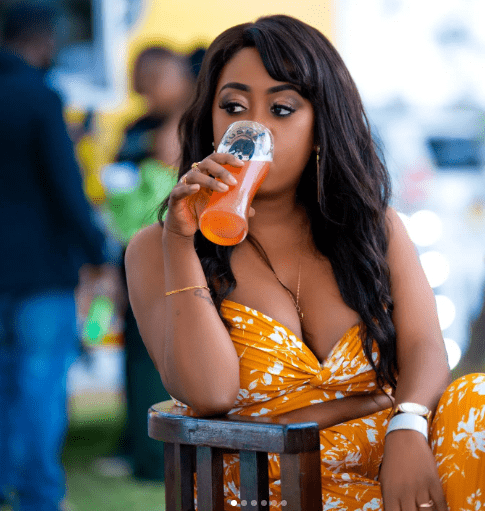 Lilian Muli was born on 4th May 1982. She is a renowned Senior News Anchor at Citizen TV in Kenya. He Shows are Friday and Saturday News at 9 PM and Weekend Editions. She also hosts Fashion Watch Show on Saturday and One on One interviews on Friday after the 9 pm News.

A Quick Glance At Lilian Muli

How Old Is Lilian Muli

Lilian Muli pursued her education at Loreto Conven Msongari, and later joined Daystar University for her Communication and Journalism course. She also pursued her MBA in Strategic Management at the University of Nairobi.

Lilian Muli started her career in 2005 at KTN where she interned in the production department. After trying and doing several screen tests to no avail, she finally got her big break when she was sent to deliver scripts and in the process left the panel of judges impressed. She found her way to the TV Screen.

In December 2010 Lilian quit working at Standard Group’s KTN and moved to Royal Media Services’ Citizen TV. She had worked at KTN for six years.
In Citizen TV, she has hosted a number of Shows like the Famous SlimPossible Show, One on One Show after Friday’s 9 PM news, and Fashion Watch on Saturday after the 9 PM news.

Lilian Muli is a news anchor and she earns not less than $2,000 at her workplace at Citizens.

Lilian is the second born of his late father Henry Muli and Peninah Muli. Her mother is still alive and lives in Bangkok Thailand. Her father was a prominent Lawyer.

News anchor Lilian Muli recently broke her house secret and gave her fans an exclusive sneak peek of her living room as she looked forward to spending more time there during her free time.

One memorable Friday afternoon on November 28, 2008, Moses showed up at the KTN offices. It was just minutes after the lunchtime news bulletin and Lillian Muli had just completed her routine news reading.

To her, it was just another ordinary afternoon at the KTN studios. But Njuguna Kanene bearing a cake, a bouquet of flowers and a tiny box was set to change Lillian’s day.

Before her colleagues, Lillian’s love-struck boyfriend of four years went down on one knee, reached out for her hand and said the magic words: “Will you marry me?” What followed was an emotional scene.
Lillian burst into joyous tears and turned the newsroom into a scene straight out of a Mexican soap opera. A few minutes later, Lillian was showing off an engagement ring from her husband-to-be, Moses Njuguna Kanene.

Lillian Muli and her fiance tied the knot in a colorful garden wedding held at Windsor Golf Course. The wedding was presided over by Pastor David Kabibi.

The Weavers Band later entertained guests by playing sentimental love songs in keeping with the mood of the day. They later went for their honeymoon in Seychelles.

Ever since Lilian Muli divorced her known husband Moses Kanene, no one really knows about her current husband since she is a secretive person. Jared Nevaton a football administrator is the father of Lillian’s daughter though he claims to be her husband there is no clarity that they are married.

Lilian and Moses Kanene have one son called Joshua who was born in 2010.

Well celebrated known Lilian Muli finally revealed the truth about his pregnancy to the truth magazine about the father of his daughter. she said at first when she broke the news to his lover Jared Nevaton he thought it was a joke. Fans speculated a lot of people on his media account to be responsible for his pregnancy but she finally said the truth and the fans are contented.

Lillian Muli cited “adultery, cruelty, and desertion” as reasons for the divorce in an affidavit that she filed at the Chief Magistrate’s court at Milimani in Nairobi on January 7, 2016.

Lilian Muli claimed that Moses Njuguna Kanene is adulterous, having cheated on her with several women before deserting her. She adds that Mr. Kanene is a man of “unpredictable moods, ungovernable temper and violent in nature,” and that he had failed to undertake his responsibilities as a husband or as a father.

Lilian Muli humbly prays that her marriage with Mr. Kanene is dissolved and that the costs of this petition be paid by Mr. Kanene.

The couple married in September 2009 in a highly publicized wedding at the Windsor Golf and Country Club. They have a six-year-old son.

Signs of Lilian Muli’s Divorce prior to 2016

During a one-on-one interview with Jeff Koinange, he came with his books which he wanted to give to Lilian Muli. Jeff asked if he can include Kanene while signing the book. She requested Jeff not to include the name Kanene.

In another instance, Lilian Muli wrote a post on Facebook after rumors went around that she had divorced, she wrote her haters off saying that her marriage was intact asking that if she was married why then would she use her husband’s name.

During their marital bliss in early 2010 and 2011, Lilian would state her name on TV news as Lilian Muli Kanene but after their alleged separation she no longer mentions the name Kanene.

The two separated due to infidelity issues and sources indicate that the sexy screen-siren has even moved away from her husband’s house.

Lilian Muli is deemed to be a party animal and is regularly spotted at Brew Bistro club located along Ngong Road in the company of different men.

But she is at most times spotted with Shabana FC Chairman, Jared Nevaton, who is alleged to be the cause of her marital problems. Jameson is her favorite drink and after taking too many, she hits the dance floor and unleashes crazy dance moves.

Her close friends are now worried that her thriving career may be going to the dogs’, thanks to her crazy party life and alcohol addiction.

Sources at Citizen TV indicate that she once went to work smelling slight booze from a distance and threw some tantrums at one boss. But she is a treasure to SK Macharia’s station and that’s why they can’t fire her easily.