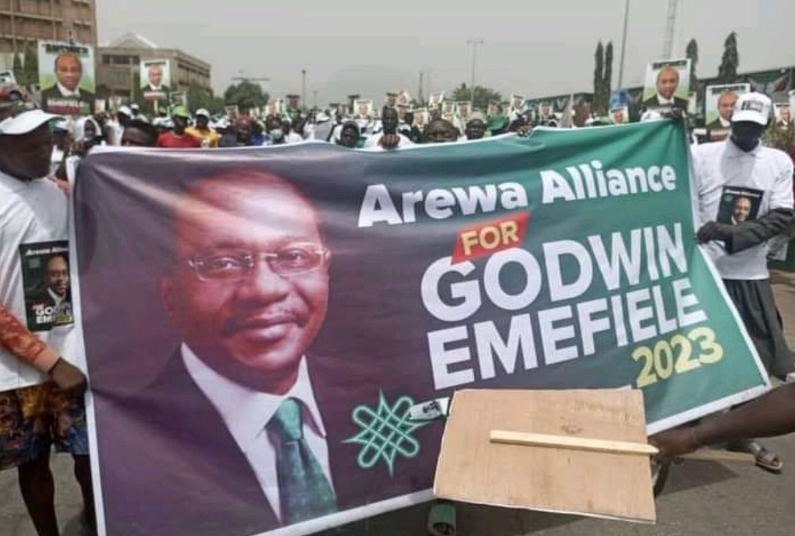 His Tenure As CBN Governor Has Been a Disaster

position in 2023, people have been seen campaigning for him making Nigerian youths very very upset and uncomfortable, they feel concerned and raise the alarm
many believe he is the reason banks are overcharging for services and he is the reason for the collapse of the naira in the stock market while restricting forex trading and cryptocurrency by him has left many families jobless and in poverty
Many also express their anger about his treatment of endsarz peaceful protesters,
If we permit him to evolve as president we’ll all may perish of hunger and poverty they added.

NEFERTITI
@firstladyship
Mr Godwin Emefiele is a traitor, the most corrupt CBN Governor in History. He destroyed the Naira & institutionalized forex round-tripping. He blacklisted Fintechs & blocked the bank accounts of #EndSARS peaceful protesters. Godwin should be in jail, to deter others like himself.
Kindly Follow Back
@Naijadailyfeedx

@Morris_Monye
CBN governor that obey’s orders to freeze protesters bank accounts according to what constitution though? He is an errand boy, a lackey as long as this current government is concerned.
12:23 PM · Mar 26, 2022·Twitter for Android
DEMAGOGUE PhD.senior advocat
@von_Bismack
Godwin Emefiele has done terribly bad as CBN governor and he deserves prison not Aso rock but using bots to run ads against his candidacy only goes to show that we need to watch out for him.This move reeks of desperation by some interested persons Is he d anointed one? We watch
BIG London
@london_Akan
APC bringing the CBN governor so Atiku can win comfortably and retain power for the North… When Atiku is done after 8 years,APC will Zone it to the north again and continue ruling Nigeria. Issoke nde
Hillz Blog
@BlogHillz
Truly extraordinary! Emefiele, has brought the office of the CBN Governor into disrepute. First, he turned himself into “boy-boy’ to friends of the President. Now, he’s openly putting up party political posters of himself for APC Convention. Is Nigeria’s money in safe hands?
David Eriba
@Mreriba
Never in my wildest dream will I ever believe that a sitting CBN Governor would fall for the deception of some cabal in power promising to make him president. Just like a directionless wind, they have aimlessly tossed him to & fro. His political naivety is smelling. A pity.
3:34 PM · Mar 26, 2022·Twitter Web App
Abdurrahman Jumare
@itz_arbdul
A whole CBN governor is a card carrying member of APC. I have never seen a bunch of inept people like these guys! APC have bastardized governance in this country!
3:44 PM · Mar 26, 2022·Twitter for iPhone
Wole
@oluwole__ola
CBN governor is a presidential aspirant under the ruling party. Lol. Says alot
Enimini
@Enimini151

Anyhowness in Nigeria is becoming worrisome, so many unapt folks at the aim of affairs, APC government has bastardized this country. CBN governor contesting for president, Nigeria is a season film indeed.
Afo of Laws
@afoguarantor100
I find d candidature of the CBN governor disturbing considering his inability to bring about stable domestic prices since 2014 or with d monetary policy contortions that have willfully eroded d value of naira & the balance on the nation’s gross external reserve in d same period ?
3:49 PM · Mar 26, 2022·Twitter for iPhone
Excellency

Next post Liquorose Is Broke And Can’t Pay Her Rent, She Beg For Help Online