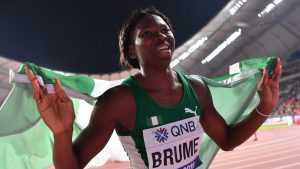 Longer jumper, Ese Brume has won the first medal for Nigeria at the ongoing Tokyo 2020 Olympics.

The African record holder leapt to a distance of 6.76m, 1cm more than the required mark to seal her place in the final.

Brume became Nigeria’s only athlete in the jumps, following the disqualification of Ruth Usoro by the Athletics Integrity Unit (AIU).

She was also Nigeria’s only medalist at the last World Championship in Doha. Ahead of the Olympics, Brume broke Chioma Ajunwa’s long-standing record of 7.12m.

She was the only Nigerian athlete who reached the final of her event at the 2016 Olympic Games in Rio, where she placed fifth with a leap of 6.81m.

Earlier, Mihambo had soared to gold in the women’s long jump, snatching victory from former champion Brittney Reese with her last leap of the competition.

The German was lying in the bronze medal position ahead of her final jump but powered down the runway to register a season-best jump of 7.00 metres.

That left 2012 Olympic champion Reese – who had led the competition with a best jump of 6.97m – with one final attempt to reclaim the lead.

But the American could only manage 6.84 with her last leap to settle for silver.

Next post Soldier Stabs Man In Ibadan Over Alleged Disrespect