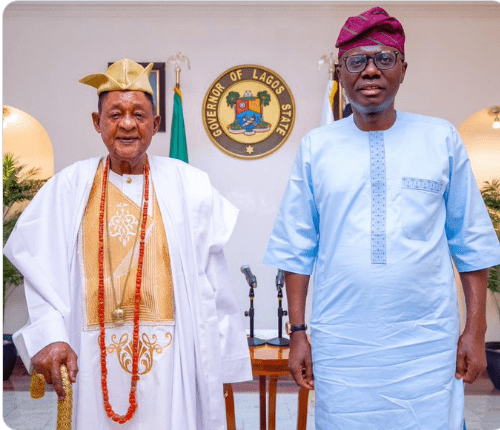 On Behalf Of The People of Lagos , I Commiserate With Governor Seyi And The People Of Oyo

Lagos State Governor has sympathized with the people of Oyo State on the death of Alaafin of Oyo, Oba Lamidi Adeyemi, who dies at age 83.
Governor Babajide Sanwo Olu used his Twitter handle to sympathize with their loss,
the Governor said on his official verified page,

On behalf of the people of Lagos State, I commiserate with Governor Seyi Makinde and the people of Oyo State, and those of the ancient Oyo Kingdom over the death of a foremost and respected traditional ruler in Nigeria, Oba Lamidi Adeyemi III, who joined his ancestors on Friday.

The death of Oba Adeyemi is a great loss, not only to the people of Oyo State but the entire Yoruba sons and daughters at home and in the diaspora because of the unique position the Alaafin of Oyo holds as a descendant of Oduduwa. He will be greatly missed.

He was one of the great promoters of Yoruba culture and tradition. He contributed immensely to the development of Oyo Kingdom and improved the livelihood of the people. As a first-class monarch, he left a legacy that the people of Oyo ancient town will continue to cherish

I pray that Almighty God finds a peaceful resting place for the soul of the late Oba Adeyemi and grant the royal family, Yoruba land and the people of Oyo town the fortitude to bear the irreparable loss.

Previous post 2023 Election : Goodluck Jonathan I Can’t Tell If I Will Contest For Office in 2023

Next post Senate :Alaafi Death Is A Big Loss To The Yoruba Individuals Home And Away,