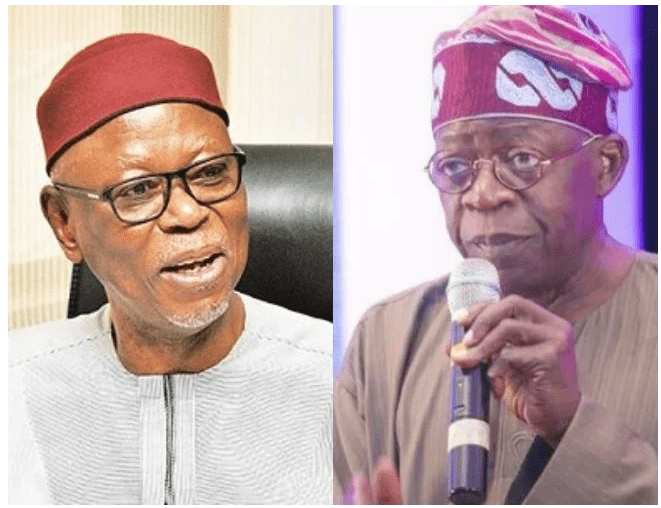 The ruling All Progressives Congress’ screening committee headed by John Odigie Oyegun has received a petition to disqualify Bola Tinubu over allegations of drug dealing and certificate forgery and Nigerians react as is enemy is the screening committee chairman,

Jack Obinyan (Osinbajo)
@JackObinyan
Oyegun should ask for all certificates, birth, primary, waec, degree, health etc…Any name conflict disqualify, Obaseki Treatment straight!
Sexy Diva
@ccta03
Some anti Tinubu supporters are happy to see Oyegun chair the APC screening committee for reasons best known to them. This alone shows they are probably scared of Tinubu’s capacity over other aspirants under fair conditions.
Mr Right
@OtunMuri
I can bet that, APC won’t give TINUBU the ticket come what may! Did you see the video of him answering question from John Oyegun, the Chairman of APC screening committee? BAT ceased for seconds & forgot everything while explaining real estate in US & UK. Why did APC leak d video?
Omeokachie
@Omeokachie2
All the best to them. One thing that is certain is that whilst Oyegun will not go out of his way to do anything to sabotage Tinubu, he will simply ensure Tinubu does not enjoy any favours or privileges. Strictry by the rules. He will simply be like that very strict Maths Teacher.
Prin Adelaja Adeleke
@princeadelajaa
Our Lagos friends are being haunted by their past deeds. They fear it may be payback time. They should go and be calming down. Chief John Odigie-Oyegun I want to believe is of a finer cut and better pedigree than the ones they often recruit for the hatchet job of.
Fortunate Ayoade
@FortunateAyoade
Asiwaju Bola Ahmed Tinubu, you are hereby disqualified by this Committee ~ Chief Oyegun If this is what you are expecting, you will wait till eternity, the screening is nothing special.
Peter Obi’s 4th Wife
@alpha068527621
Now the North is breathing heavily over Tinubu’s necks. The votes of the Igbo-man that BAT said he doesn’t need, is required to counter and balance the threat of Atiku. Political strategist in the mud.
Micheal Akanji
@mickiebrownkie
ICYMI: The Oyegun’s led screening committee thrashed over 3 ludicrous petitions against Asiwaju Bola Tinubu by a Kano State APC Member Named Sagir Mai Iyali. VP
@ProfOsinbajo

, your message was well delivered and thrashed.

I am_Henry
@Henry4evame
This is really disturbing, I can’t allow my father, Uncle or friend to going through this, I will constantly advise you to rest and forget about this your ambition.Tinubu couldn’t make any sense here even Oyegun had to step in couple of times. This is embarrassing to say de least
AJIBOLA TAIWO
@Ajibmah
Report just reaching us that the committee appointed for APC presidential screening of the aspirants led by Oyegun has disqualified the aspirant, Asiwaju Bola Ahmed Tinubu. So pathetic that the political ambition of Lagos Jagaban has been truncated by his arch rival.
Coup Counter Coup
@krismighty
Exactly what i heard, Oyegun had to help him out, while he claps. Incoherent speech is a sign of mental health issues.( ask a doctor) If he win, it’s going to be foreign medical trip always.
Ifedolapo Osun
@IfedolapoOsun
We all know that Bola Tinubu didn’t have any school certificate, if Oyegun committee disqualify him nothing will happen!
Micheal Akanji
@mickiebrownkie
PYO camp, they were happy because Oyegun is the Chairman of the APC presidential screening exercise as if he wouldn’t clear the most popular presidential aspirant in the history of Nigeria. Tinubu has been cleared, they are now hiding their faces in shame.