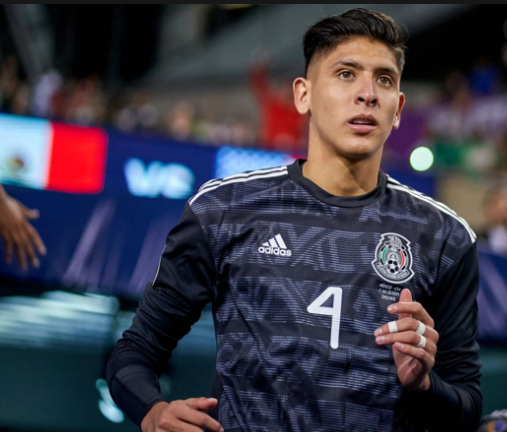 Edson Omar Alvarez Valazquez born on 24 October 1997, is a Mexican professional footballer who is a player for the Eredivisie club Ajax and for the Mexico nation’s national side. A defensive midfielder is his primary role, but the player can also be found as an defender in the centre.

Alvarez is a native of Tlalnepantla de Baz, a municipality located just to the north of Mexico City, to Adriana Velazquez and Evaristo Alvarez. When he was a kid, he would be employed by his family’s company that made sports jerseys to local clubs which he claims was his first introduction to the game. When he was 14 years old, Alvarez tried out for the team’s youth squad of Pachuca but Alvarez was not able to make it to the roster due to diminutive size. In the process of considering quitting football, but to the disapproval of his parents, who believed that his talent was sufficient to fulfill his ambition of playing professionally, Alvarez decided to try out for the club’s youth team. He eventually made the team after a 3-month test. He made it to the team’s daily practices through a three-to-four-hour travel time between the house he lives in Tlalnepantla and to the training facility of the club in Coapa. According to Alvarez the coach would allocate 70% of his salary per month on transportation.

In 2014, aged 16 Alvarez joined the Club America youth program as a player for the team for under-17s. In the following year, still playing for the team’s under-17 squad, Alvarez was promoted to America’s second division team.

In August of 2016, the first-team manager Ignacio Ambriz gave Alvarez his first appearance on the bench during America’s weekly league game with Monarcas Morelia, using the number 282 on the jersey. On October 29 the newly appointed head coach Ricardo La Volpe gave 19 year old Alvarez the chance to play his Liga MX debut in the team’s win against Santos Laguna; he played for the entire 90 minutes and was named third in the man of the match poll online by the fans of the club. On December 25 Alvarez scored his first goal of his career at the Apertura final against Tigres UANL.

Before the beginning of the 2017-18 campaign, Alvarez was presented with his number four shirt that was then taken away due to his departure from Erik Pimentel.

On the 16th of December, Alvarez was given the starting position for the return part of the Apertura final against Cruz Azul, playing in midfield, replacing his injured Mateus Uribe. He scored two goals in the final as America was awarded the 13th title in its league following an aggregate score of 2-0. On the 23rd of February, 2019 Alvarez completed his 100th match-day performance in the national team of America as part of the side’s 3-0 win against Lobos BUAP.

On the 19th of July in 2019 Dutch team Ajax made an announcement with Club America for the signing of Alvarez for a five-year deal with the passing of a medical exam, and for an estimated fee of $17 million. Alvarez passed his medical exam and was handed over on the 22nd of July, receiving his number four shirt that was rescinded after his departure from Matthijs De Ligt. The club announced a formal transfer value in the amount of EUR15 million. On the 17th of August, Alvarez made his debut in the competitive game for Ajax in the 74th minute as a substitute during the team’s 4-1 win in the league against VVV-Venlo. On August 29, Alvarez scored his first goal of his debut in the match against APOEL in the second leg of the UEFA Champions League play-off round. On the 17th of September Alvarez made it two goals in the 3-1 Champions League group stage victory against Lille making him the very first Mexican soccer player who scored in their Champions League debut.

On the 21st March 2021 Alvarez was the first to score an Eredivisie score in the Eredivisie for Ajax with a score of 5-0 win against ADO Den Haag. After the conclusion of his second season Alvarez was named the top player of the league.

On the 27th of October, 2021 it was announced that Alvarez was granted the extension of his contract to Ajax up to 2025. On April 30, 2022, Alvarez was admitted into the club’s Club van 100, making his 100th appearance in a 3-0 victory against PEC Zwolle. He was the 174th player in history of Ajax to be inducted into the ranks.

On January 30, 2017 Alvarez was first called to the senior national squad to play a friendly against Iceland. Alvarez made his debut for the senior team on the 8th of February against Iceland and was substituted for Jesus Molina in the 60th minute. Alongside Alejandro Mayorga, Alvarez was identified as a practice squad member for the Confederations Cup team. He was selected to play in the Gold Cup, making him the youngest player on the team. The roster was mostly comprised of substitute players since the team was in Russia participating for the Confederations Cup. On July 17, the final round of group stages in the group stage against Curacao, Alvarez scored his first goal for Mexico’s national team in the victory 2-0, becoming one of the oldest Mexican athlete to have scored a goal at an official Gold Cup tournament at 19 years old.

In May of 2018, Alvarez was named to Mexico’s first 28-man team for this year’s World Cup. The youngest listed. He was eventually added to the 23-man squad that was announced on the 4th of June. He was a part of all Mexico’s group stage games; in Mexico’s final match with Sweden, Alvarez started at right-back and scored an individual goal in the 74th minute during Mexico’s 3-0 defeat. Also, he started in the round-of-16 loss to Brazil.

In May of 2019, Alvarez was included in Gerardo Martino’s pro forma Gold Cup roster. In a friendly encounter against Venezuela the team sustained an apparent knee injury however, it was later revealed to be a snare. He was named on the final roster for the tournament. Alvarez played as a player in five games in the final match, in which Mexico went on to triumph in the tournament.