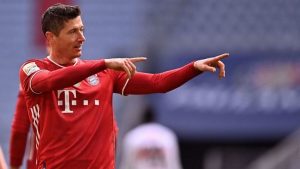 A city councilor in Wieliczka, Kamil Jastrzebski, has called the final results of the poll “a great deal of injustice”.

Robert Lewandowski, the Bayern Munich striker, will be named the best player in the world and given a ball of salt by the Polish town of Wieliczka.

This is as a consolation for missing out on the 2021 prize to Lionel Messi.

A city councilor in Wieliczka, Kamil Jastrzebski, has called the final results of the poll “a great deal of injustice”.

“There has been a great deal of injustice, and Robert Lewandowski has become its victim.

“Therefore – as a member of Wieliczka – I propose that the city symbolically announce that Lewy is the best footballer in the world.

“There was also a proposal to expand my idea. Some people want to give the captain of our team a Salt Ball. In the past, salt was called ‘white gold’, so it also has a historical and geographical basis. I think that despite inflation and the general crisis, Wieliczka will be able to get enough salt,” Jastrzebski wrote on Twitter.

France Football, the organizers of the Ballon d’Or, have said they will think of awarding Lewandowski the 2020 prize.